A little trip to the emergency room. 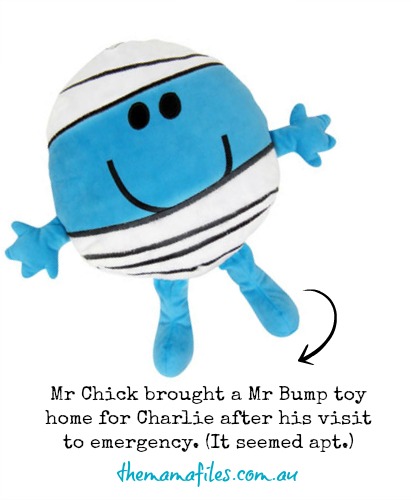 On the weekend, Charlie fell out of his cot. It was my first scary test as a parent, and as it turns out, I am officially shit in a crisis.

He was playing in his cot and standing up and pretty chuffed about it. The side was only half up and he was holding on and we were both laughing at his cleverness.

“Go bubba! Who’s a big strong boy standing up for the first time in his cot?”

You know those moments where you watch something awful happening, almost in slo-mo, and you just freeze? I was not even an arm’s length away but even though I immediately leapt for him, I couldn’t catch him and in that split second between him falling and the sickening thump I just kept having these ridiculous thoughts: Why didn’t I put a rug under the cot like I planned, why didn’t I have the side up, why didn’t I think he could topple over, why why why why!

He hit the deck and bellowed with surprise and pain. I scooped him off the floor, and his dad and I took turns cuddling him and trying to comfort him while watching a bruise the size of an egg forming over his right eye. Seriously I’ve not seen a shiner like that develop SO quickly and there was no question about it, we were off to emergency.

You never want to see your bubba cry like that or be in pain. I pretty much beat myself up the whole way there. I was in the back of the car with him, trying to keep him awake even though he clearly wanted a little cat nap. His latest thing is this monkey toy that we flip over and that makes him laugh, and he kept looking at me red-eyed, as if to say, Stop flipping the stupid monkey over mama, and let me sleep. Oh, and stop crying. I’m the one with a giant egg on my head.

Never have I been so happy to live 2 minutes from RPA. We rocked up to emergency looking like we’d just gotten out of bed and actually, I was still in my pajama pants. The boys held it together but I was a blubbering mess at this point. The nurses kept giving me tissues and asking if I was okay. Well no, not really, I am an idiot who stupidly didn’t put the side of the cot up and as a result my kid fell out onto his head.

The good thing (if there’s ever a good thing about having to go to emergency) is how fast they rush babies through. Within minutes we were sitting in an observation room while they tested his heart rate. “It’s a shock I know, but the first of many, darl,” said one of the nurses. “You just wait. He’ll be falling out of trees and off his skateboard and getting bumps and bruises for years to come!”

Down in the kids’ ward, they checked Charlie’s blood pressure and heart rate again (with tiny sensors they velcroed onto his finger – he was intrigued and of course immediately tried to eat the sensor). The nurses were super sweet, making sure we had everything we needed and keeping an eye on the bubba. We killed time by reading him books and chatting to other patients, including a Spanish woman who’d been there for hours after her two-year-old daughter had suffered a bad asthma attack. When she heard why we were there, she told us her daughter had fallen off the change table when she was four months old and it was the scariest day of her life. “We got rid of the change table the next day.” Mental note: jettison the change table.

Eventually, we were asked to bring him into the weighing room, where we stripped him and tried to put him on the scale. He was having none of it. But I reckon if you had a giant headache and people kept undressing you and poking and prodding you you’d probably be pissed too.

He announced his displeasure by doing a gigantic wee down my tee-shirt. I swapped it for a white hospital gown the nurses gave me, which teamed perfectly with my giant clompy trainers, pajama trackies, bedhead, red-rimmed eyes and general unwashed vibe. (That is, if you’re trying to impersonate someone attempting to break out of a mental institution.)

I’d hurriedly packed a bag with everything I thought we might need – dummies, bottles, change of clothes for Charlie, his favourite toys, his elephant blankie, my wallet and phone, and after the weigh in I changed him out of his pjs and settled down to give him a bottle. The doctor chose that moment to come over and bring us into an observation cubicle. Again, he wanted Charlie naked. I could tell this wouldn’t go down well; he’d already had his beloved bottle interrupted, and now mama was trying to undress him again. He cracked it big time, which was fun for everyone, but the doctor took the screaming in his stride, as you’d imagine a doctor on the kids ward would.

“Did he cry immediately after falling?” Yes.

“Has he slept? Any drowsiness?” No. And in fact, he seemed more like his normal self than ever. He’d eaten every hospital book in sight, commandeered all the best toys in the toyroom, and sat enraptured while Monty, the two-year-old asthma patient, sang him a song in Spanish.

“He has a low grade head injury,” the doctor announced. “I see it every day, multiple times a day – this thing happening. But he’s got a hard head and they’re very bouncy at this age, ha ha ha!”

I wasn’t that surprised, actually; whenever Charlie has head-butted me I’ve been the one wincing in pain. I always knew he had a hard noggin.

“We’re going to keep you in for observation for another two hours then we’ll let you go – the bruise will probably get worse before it gets better and he may get a black eye. Some kids also have seizures so if that happens, you need to come back,” he added.

Finally we were allowed to take him home, where he promptly had a big nap on the couch. I think we were probably more traumatised than he was, in the end, and the whole experience has made me realise several things: 1) Charlie is super adventurous and curious and I should never underestimate his abilities; 2) He’s never going to be in the cot again without the side up and 3) I really, really have to babyproof the house. Like, asap.

You’d think with a head injury Charlie might have been keen to hit the sack early, but no. He stayed up til 10pm chatting away, watching property shows with great interest and eyeing off my wine (medicinal). I didn’t think he’d ever go to bed. And since then, his crawling has been off the charts and he hasn’t slept a great deal since so I’m wondering if the bump on the head has now given him mutant powers. Stay tuned.