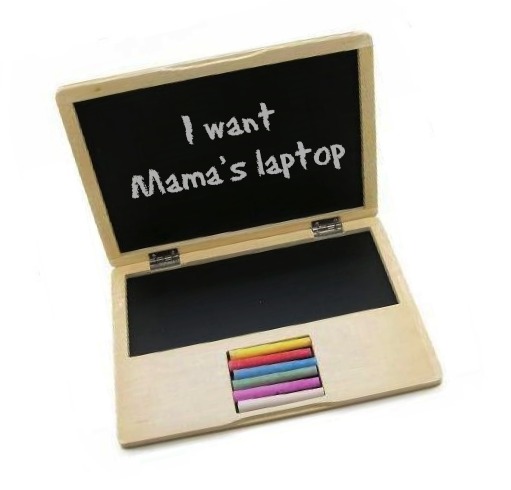 I always thought I’d go back to work when Charlie was four months old. I was basically a zombie back then, so the deadline was shifted to six months. Then I vowed, seven months for sure. Eight months snuck by. Now we’re at nine months, I felt it was time to dip a toe back in, and when a juicy copy project recently crossed my desk, I took the commission and told myself confidently, ‘You’ve got this.’

But I didn’t have it. I didn’t have it at all. Holy crap Batman it is HARD working when you have a bubba around. It’s actually so hard I have contemplated immediately getting pregnant again so there wasn’t even a question of returning to work for at least the next five years. (I’m joking. Sort of.)

Firstly, Charlie is the biggest work saboteur around. If I even look like I might be opening my laptop, the kid comes crawling so fast I literally have to commando block him (not really. I just grab him and force him to submit to 20-odd tummy raspberries) or risk losing all my data. I even got him his own baby laptop so he wouldn’t want mine, and the novelty lasted all of 30 seconds. Why do I want him away from my devices? Because he either a) eats them or b) breaks them.

Take yesterday. I was racing to finish a deadline on my desktop computer and Mr Chick plonked him on my lap for a moment. Charlie took one look at my big computer screen, squawked excitedly and bashed his fat little hand on my keyboard. Just for a second, but whatever he did froze the screen and killed the mouse and we couldn’t get it working again. For an hour and a half.

I can’t help wondering if this is a big finger waggle from the universe telling me to stop working and concentrate on ONLY raising my kid for a bit longer, but then there’s the whole fact that… well, I WANT to get back to work. I miss it. Work makes me feel happy and productive and like I’ve accomplished something other than ensure Charlie tries a new food, naps for two hours and doesn’t do a poo in the bath.

Last week, my husband asked why I wasn’t going to the Sydney Writer’s Festival and I said mournfully, ‘Too hard with Charlie.’ He said, ‘Bugger that, find something you want to see and book tickets’ so I did, and we went. We pram swapped while he went to something on writing and Shakespeare, and I went to something called Motherhood and Creativity: The Divided Heart.

More evidence that the universe has a funny sense of humour.

I sat there with my friend Pip (we were united in our indignation that SWF had not asked us to speak on a panel this year about our truly amazing new sex book), and I alternated between giggling, mainly at Jane Caro, who is awesome, and wanting to cry. It was all about whether you have to choose between being a mum and being a creative person, and dealing with the fear of motherhood swallowing up your creativity, and how successful women artists and writers and actresses combine both (Claudia Karvan was also on the panel and made some really funny and amazing points, many of which I put on Twitter).

You have to have a certain gumption, said the author, Rachel Power, to say, ‘The expressed milk is in the fridge, I’m out the door’ and leave the baby and try to compartmentalise what the baby and whoever’s caring for the baby might be doing in your absence. So you can get on with writing or recording or painting or doing whatever it is that you do or did before you had kids.

And it sounds all easy – just walk out the door, chuck him in daycare, hire a nanny – but it is so not. And so the session kind of made me sad and mad and inspired and sad again, all at once.

I went home and worked until 2am on my copy project knowing full well Charlie would be pulling my hair with gusto at 5am. And the next day Mr Chick, who had the day off, took him out so I could finish it. I wanted to go to the park with the boys, but I sat there and finished it and actually felt good about the fact that I am helping to pay the mortgage for the first time in a year. This may sound weird but it makes me feel more like ME. Which is awesome when so much of you is swallowed up by being a mama.

What have I learned from working with a kid around? Firstly, that you better have someone who can take him out because he squeals and laughs and waves at you and tries to crawl to you and just does cute shit constantly and you just want to run over and roll around with him on the couch and giggle. And secondly, when your hubby does cart him off to the park for half an hour you discover you have a post-pregnancy mutant super-power: the ability to do a lot of stuff in a very tiny amount of time. And thirdly, we need to think about nannies like yesterday.

Tags:baby, journalist, working at home, working with a baby
Share this article: